Home » Blog » Information » What is Driving Under the Influence? What is Driving Under the Influence?

What is Driving Under the Influence? The legal definition of driving under the influence is the offense of operating any type of motor vehicle while under the influence of drugs or alcohol to the extent that it impairs your ability to operate the vehicle safely. You may believe this only pertains to cars, trucks, vans, or motorcycles, but motor vehicles can also include motorized watercraft, lawnmowers, and mopeds.

The legal limit of blood alcohol content in Tennessee is 0.08, and anything at or above this is considered driving under the influence. Many people think DUIs only pertain to alcohol, but they actually include over-the-counter drugs, prescription drugs, and illicit drugs.

How Does Driving Under the Influence Affect You?

If you have been using drugs or alcohol, there are several skills and functions necessary for operating a vehicle that will be impaired. Your reaction time will be a lot slower, which is dangerous for driving. You’ll also have impaired vision and judgment, both of which are necessary for properly and safely operating a motor vehicle.

Things to Know About DUIs and Personal Injury Claims Another aspect of driving under the influence you may not know about is Tennessee’s Dram Shop law. This law might allow a victim in a DUI-related accident to file a personal injury claim against the vendor who sold the driver drugs or alcohol. A claim like this may be pursued if:

What to Look for in a DUI Accident 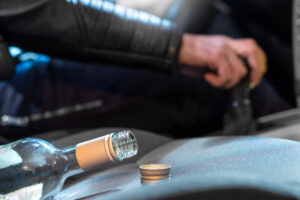 If you are unfortunately involved in an accident, here are some things to keep an eye out for to see if driving under the influence is part of the cause.

Smell of Alcohol or Drugs

Disposing of containers or paraphernalia

If you see the driver or passengers disposing of anything from the vehicle, you should inform the authorities.

Another thing to look out for is the driver switching seats with a sober passenger after an accident has occurred.

Now you can answer the question, “what is driving under the influence?” Unfortunately, accidents like this happen in Tennessee, but that doesn’t mean you have to face it alone. Reach out to one of our experienced car accident lawyers to discuss your case today.